A CUC delegation led by President Liao Xiangzhong paid 8-day visit to four universities in the UK and Ireland from July 3 to 10. The visits were aimed at seeking cooperation partners and expanding educational resources for running a campus in Hainan, thus helping CUC go global in the field of teaching.

There are some high-tech applications that impressed the delegation at most, for instance, wind tunnel testing laboratory, 3D printing laboratory, and future intelligent transportation design laboratory, which demonstrates how Coventry University attaches great importance to practical teaching and its school-running pattern of combining teaching and science parks.

On July 4, a meeting was held between the officials of Hainan Provincial Government, Communication University of China and Coventry University, signing a strategic cooperation framework agreement, which further promotes cooperative running-school in Hainan. 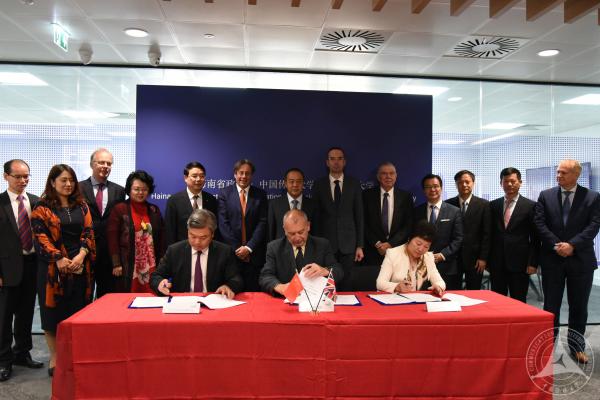 During the talks, Mao Chaofeng, Vice Governor of Hainan province in the Southern China, said that he was confident in three parties’ cooperation and the Government would spare no effort to satisfy their demands and fulfill responsibilities.

On the occasion, President Liao said that CUC pays high attention to Hainan program, regarding it as a main goal of the future development of CUC. As a result, contribution would be made for construction of Hainan as an international education island by introducing world-class educational resources, and forging a world-class university.

John Ressen, President of Coventry University, expressed his pleasure for cooperation with both sides to create a new international education area and believed it definitely would be a win-win result through the complementary advantages of all parties and close cooperation.

On July 5, the delegation visited Nottingham Trent University(NTU), which is some 260 km away from London. During the visit there, Vice President Ryan gave a detailed introduction of NTU including its development history, school strength, discipline characteristics and teaching mode. 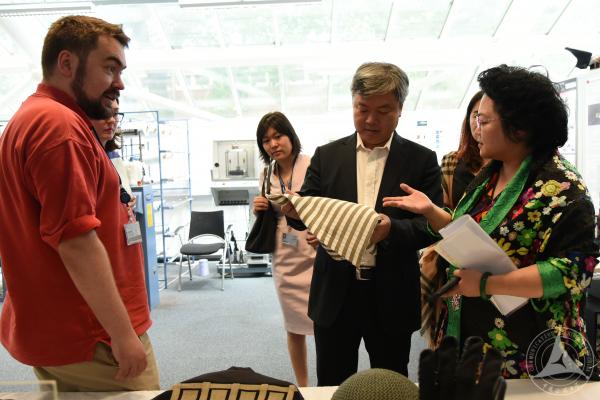 President of CUC Liao Xiangzhong is watching a design work by a student from NTU.

After that, Liao and Eduard Peck, President of the NTU held in-depth talks on how to conduct cooperation in Hainan.Peck expressed his willingness to cooperate with CUC in Hainan. The two sides agreed to carry out cooperation in E-sports through complementary advantages and synergy, and to build a world-class majors such as E-sports and design and digital creative,  thus actively promoting the construction of innovation centers of production, teaching and research.

Founded in 1843, Nottingham Trent University is a prestigious British school with a long history and a high academic and teaching reputation in the UK. Undergraduate teaching and teaching experience of students are on the high agenda of NTU. And there are key advantages in many major, such as public relations, art design, fashion design, food safety, and urban planning. 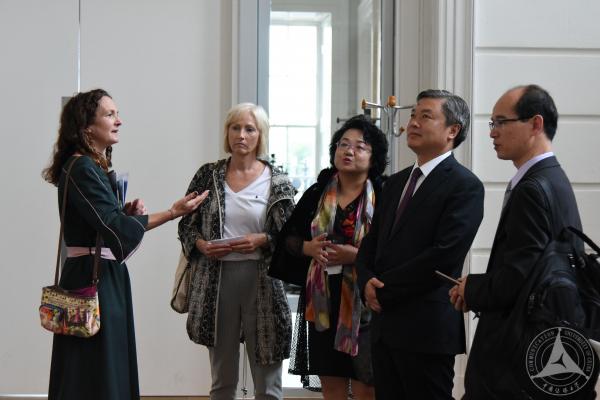 A teacher(L1) is introducing the banking teaching practice base of Business School to President Liao(R2) and his colleagues.

The last stop of the delegation was Dublin City University. The Vice-President Trevor Holmes warmly welcomed Liao and his colleagues. After a meeting, President Liao(R3) and Vice-President Trevor Holmes(L3) posing for a group photo.

In 2014,both sides has established relationship by signing a “1+1” cooperation agreement targeted for master students majoring in communication engineering. This summer, some four students of CUC will study in DCU.